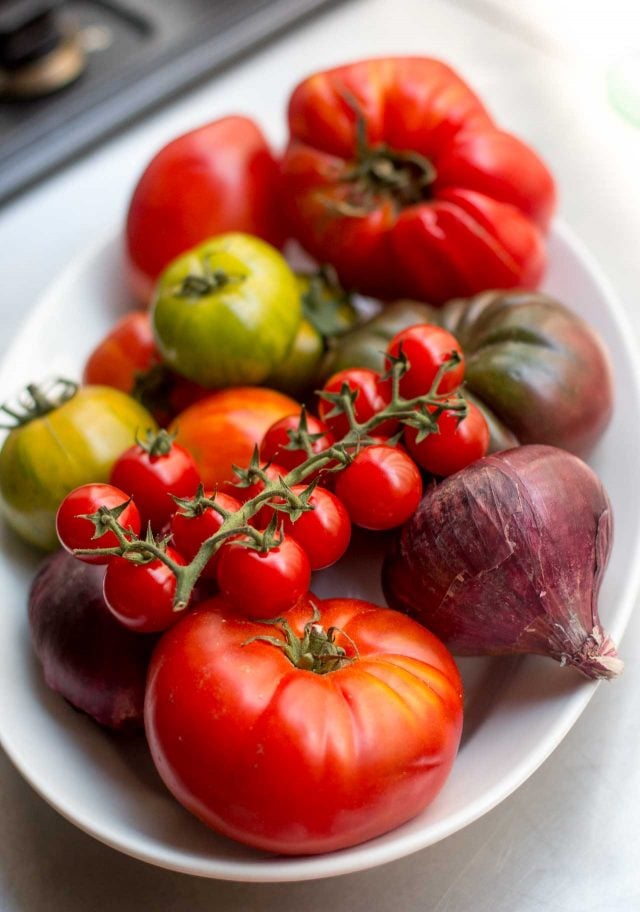 Tomatoes didn’t originally come from Italy, but they’ve certainly made up for lost time. Now it’s hard to think of Italian cuisine without them, from classic dishes, from Pasta all’Arrabiata and Salade Caprese, to Pizza Margherita and Panzanella, a bread and tomato salad that’s one of my favorite things to make, and eat.

This summer salad gets tossed with basil, which boosts its appeal (at least in my book…), as my summer trilogy has traditionally been tomatoes, basil, and fresh corn. But since fresh corn isn’t widely available here, I have to make do with something that is: Bread. And that’s fine by me. 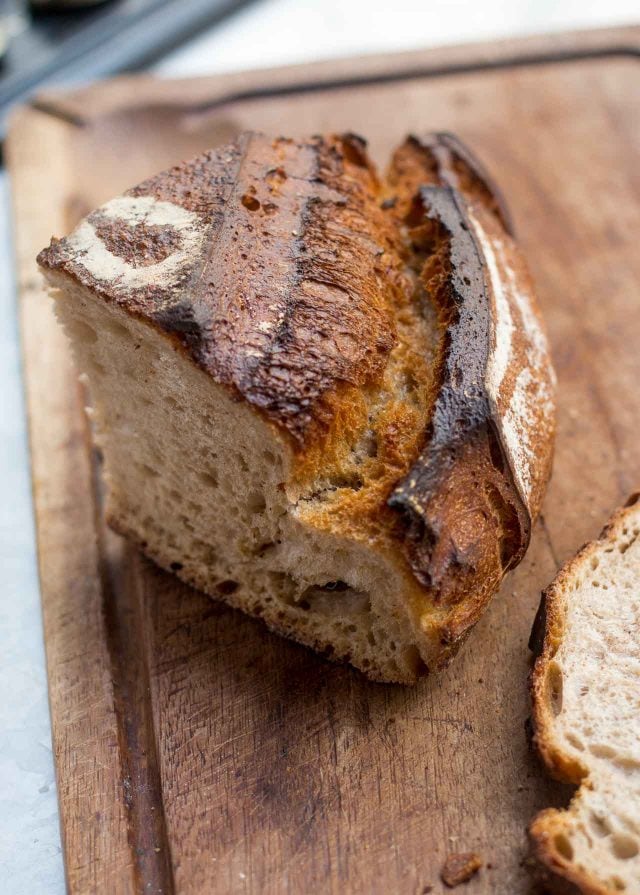 There’s no shortage of leftover bread in France (and for people who say, “What’s leftover bread?” I applaud you for being able to eat an entire loaf of bread in one go – although some bread is so good, I agree that it’s hard to stop) as it’s a ritual to get fresh bread daily. I, too, like any excuse to visit a boulangerie, so it’s great to have a way to use up the pain d’hier. 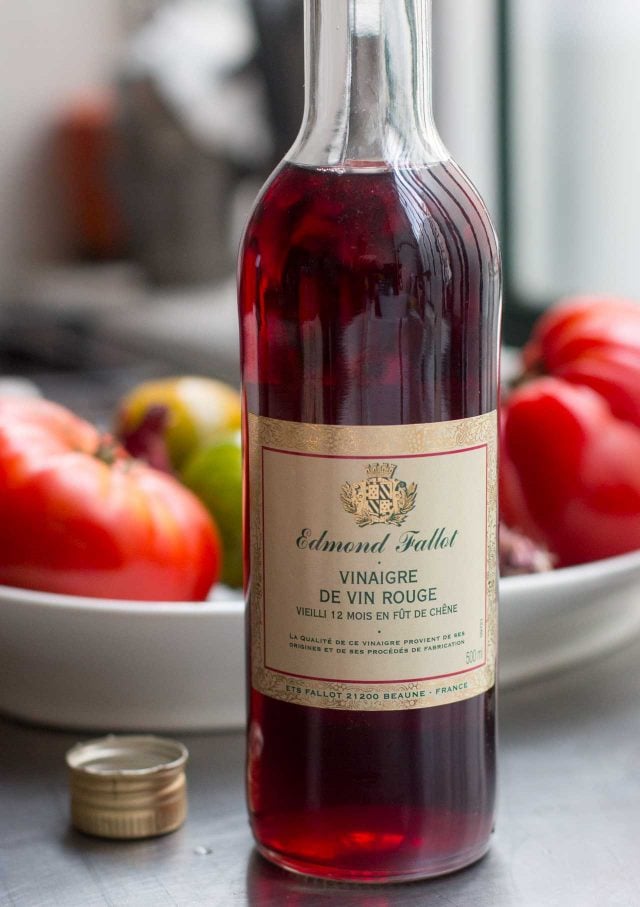 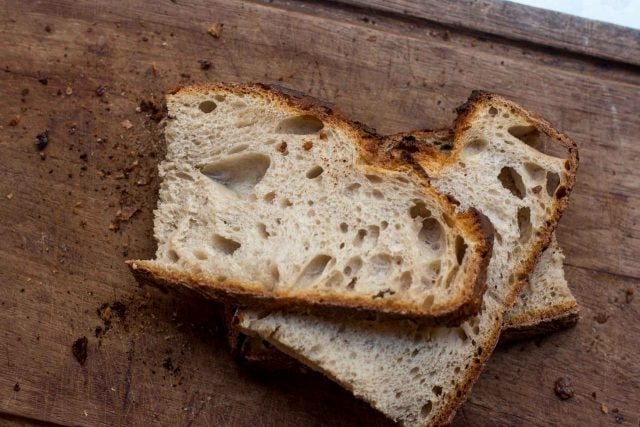 Proof that just because you’re from a country means you follow the rules, some Italian websites veer from tradition and list Dijon mustard as an ingredient in Panzanella. And esteemed cooking teacher and author, Marcella Hazan, used anchovies, garlic, and capers in her Panzanella. And pedants may want to avert your eyes here, but I’ve even read some Italian recipes that say you can “enrich” the salad with shrimp, olives, tuna, beans, or hard-cooked eggs. 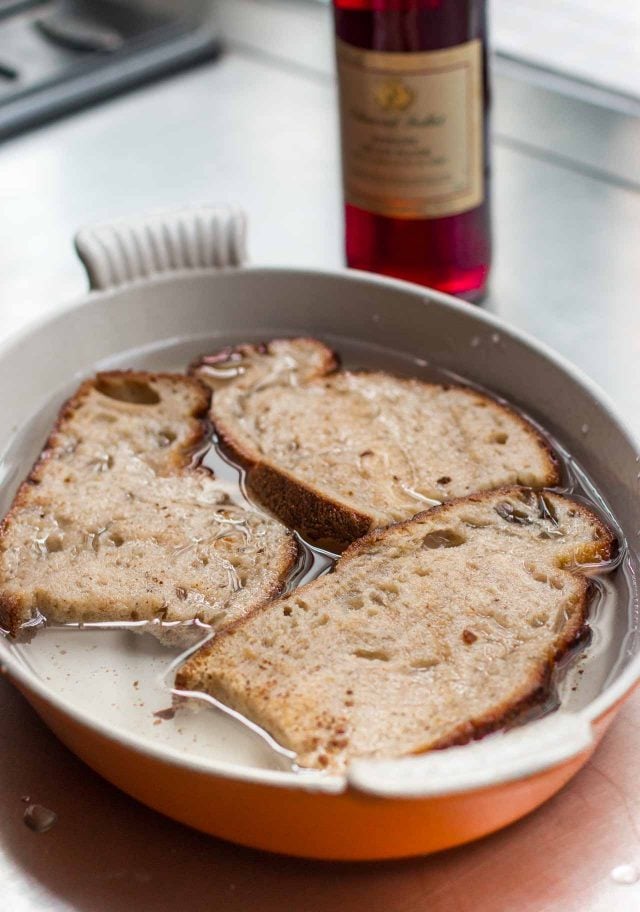 One rule that’s hard to follow is that unsalted bread is supposed to be used in Panzanella. I don’t buy unsalted bread – and to be honest, I don’t know even know where to find it – so I use regular levain (sourdough bread.) Like the tomatoes, the quality is the bread is surprisingly important, as is the olive oil and vinegar. As my Italian-based friends say, “Olive oil isn’t just to keep things from sticking to the pan, it’s a flavor.” So give yourself permission to keep a good bottle on hand for drizzling and using on salads. 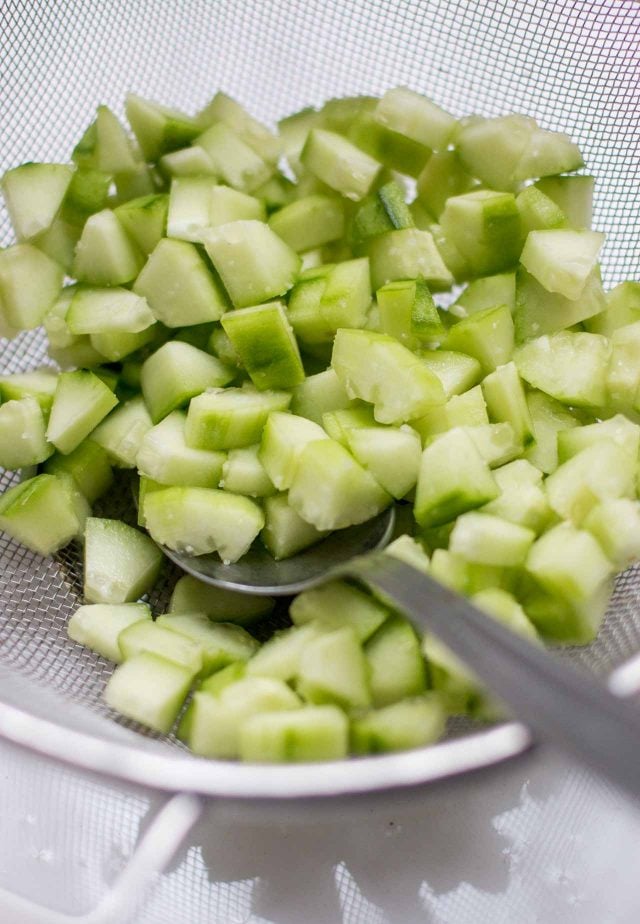 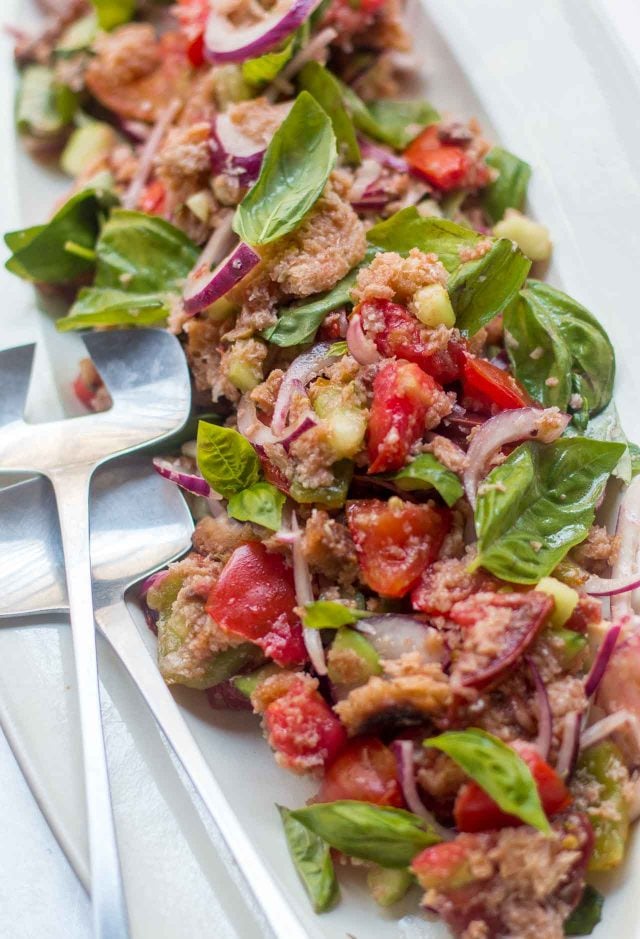 And spring for good vinegar, too. Marcella Hazan used to get bonkers about that. And I agree. Good vinegar is just a few bucks more than the bottle-shelf stuff, and it makes a world of difference in your salads. Since it’s used by the spoonful, good vinegar is one of the world’s great bargains. 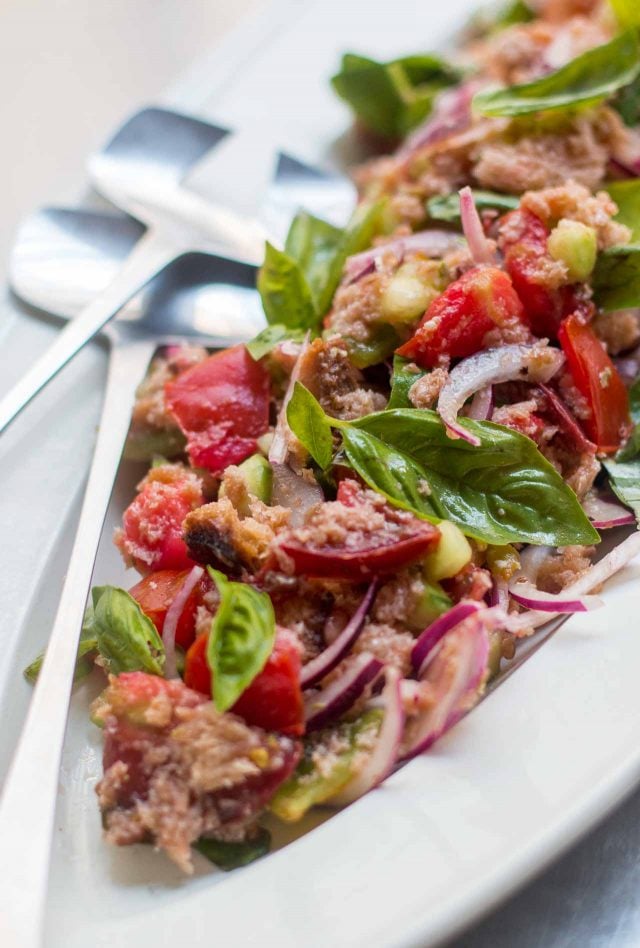 Ideally, you want to make this salad when tomatoes are at their peak. If only “okay” tomatoes are available, you can put the cut pieces in a colander, sprinkle them with a little salt, and let them stand for 15 to 20 minutes, which’ll improve their flavor. When I made this, my Parisian guests politely pushed the raw onions to the sides of their plate, but otherwise, everyone really loved this Panzanella. I was expecting to have leftovers the next day, but that didn’t happen. 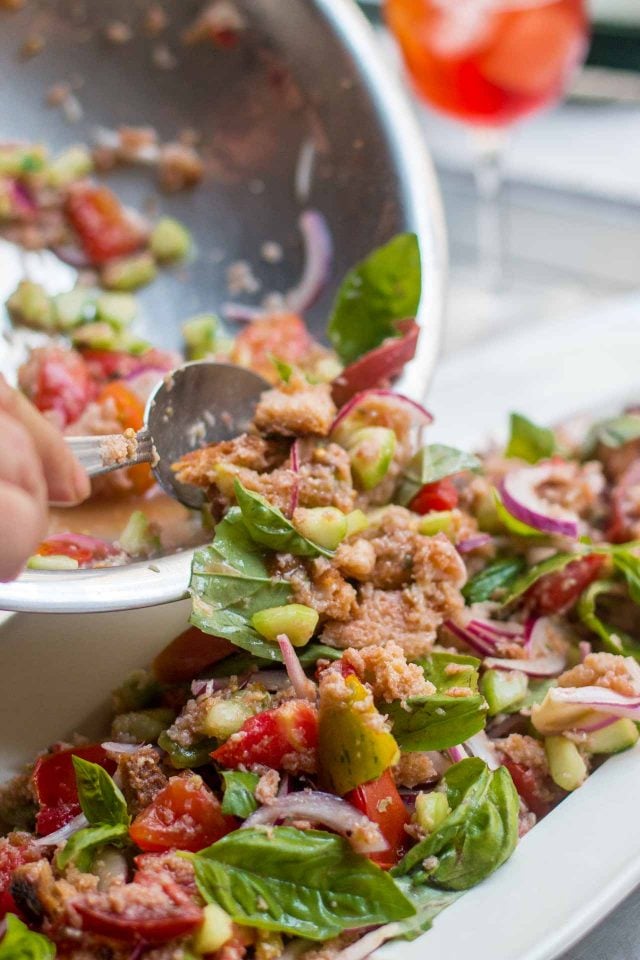 If your tomatoes are not exceptional, you can toss them in a little salt and drain them in a colander for 15 to 20 minutes before using.Italian cookbook author Marcella Hazan also adds anchovies and capers to Panzanella. Although not traditional, they are worthwhile additions and I sometimes sneak them in, too. If you want to add them, use 1 tablespoon of capers, rinsed, drained and minced, and 3 to 4 anchovy filets, minced, to the dressing in step #3.

1 1/2 tablespoons red wine vinegar, plus extra for soaking the bread and onions

handful fresh basil leaves, about 15 to 20, torn into pieces

1. Soak the bread in cold water with a splash of vinegar in it, until soft. (Depending on the bread, it can take between 2 and 10 minutes.) Remove the bread slices and squeeze them very dry with your hands. Set aside.

2. Add the onions to the cold water with another splash of vinegar, and let stand for 1 hour. Place the cucumbers in a mesh strainer and sprinkle with a little salt. Let drain for 20 minutes. (Or longer.)

3. In a large bowl, mix together the vinegar, garlic, and salt, stirring until the salt is dissolved. Stir in the olive oil.

4. Add the tomatoes to the bowl with the dressing. Tear the bread into bite-size pieces into the bowl. Drain the onions and add them to the bowl along with the cucumbers. Mix well and let stand at least 15 minutes. Add the basil leaves and mix again. Taste, and add additional salt and vinegar, if desired.

Note: Panzanella can be served soon after it’s made but it’s also fine to keep it at room temperature for several hours, making it a perfect do-ahead dish. 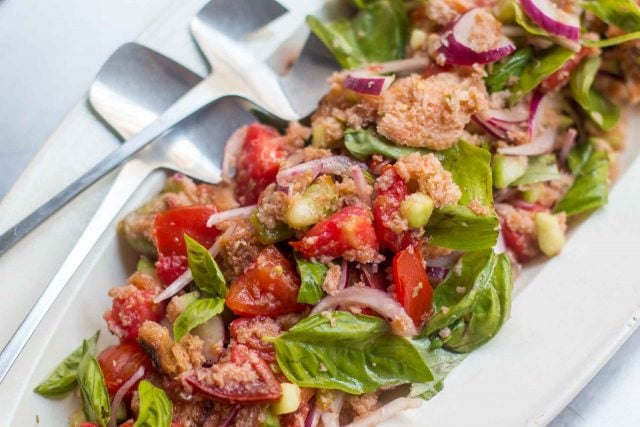 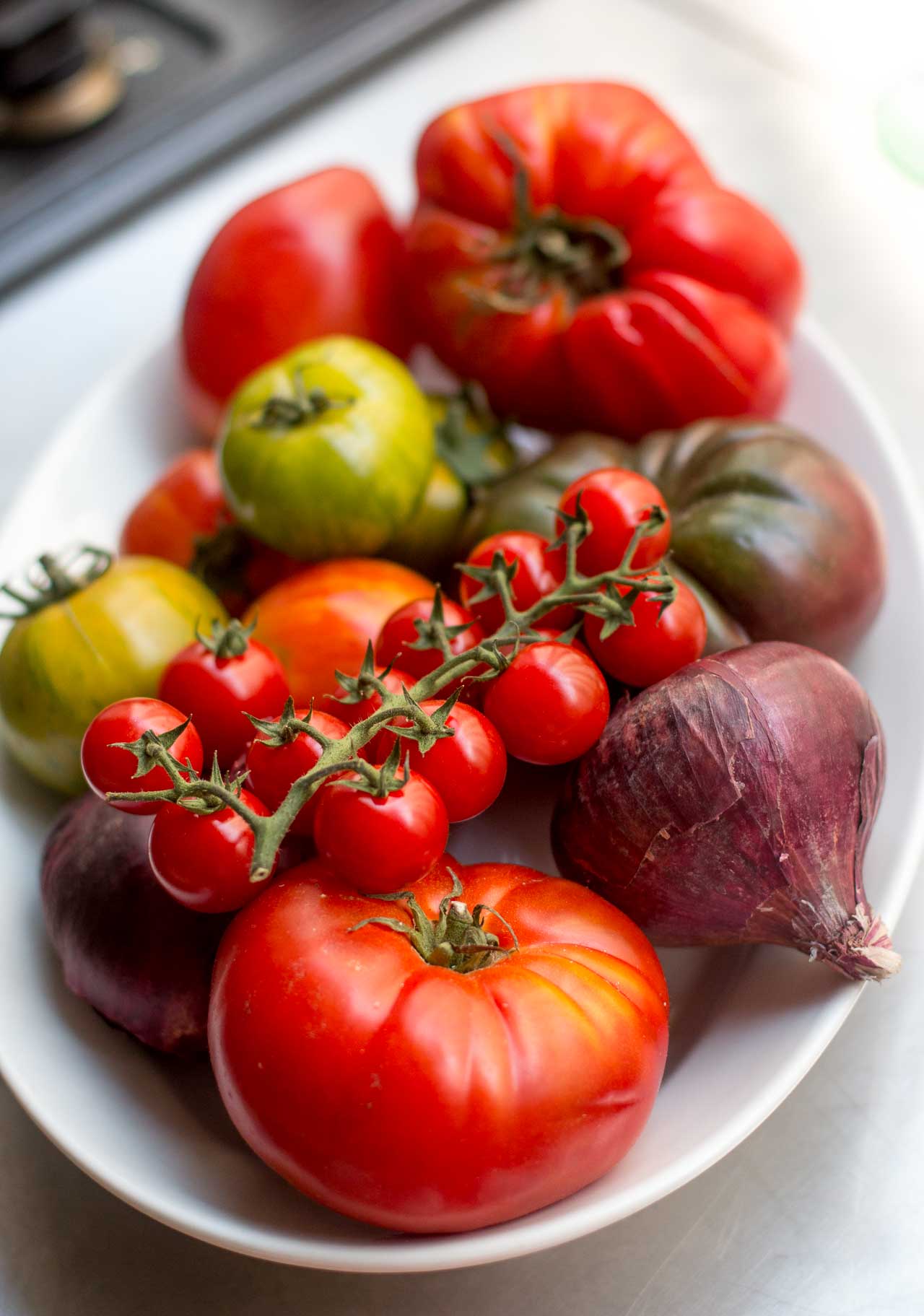